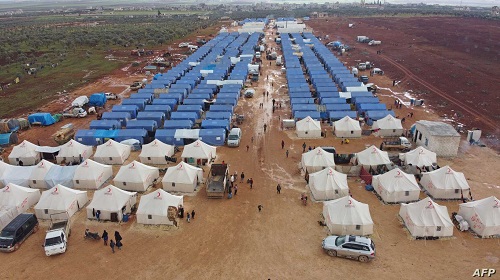 Umm Omar and her family were among thousands of displaced Syrians fleeing Idlib last week as the Syrian regime, backed by Russian air power, pushed deeper into the last rebel stronghold, in the northwest part of the country.

The 50-year-old woman, along with her husband, nine children and seven grandchildren, had few options as shelter was extremely scarce in the war-torn country. Years of conflict and repeated displacement shaped her belief that any safe place within Syria was merely temporary.

“The roads were clogged with fleets of cars, small trucks and motorbikes. Entire towns and cities were void of all residents,” Omar, who didn’t want to disclose her real name for security reasons, told VOA. “Everyone is heading to anyplace that’s safe in a massive exodus from Idlib.”

Idlib is home to nearly 3 million people, almost half of whom have been displaced from other parts of Syria during the country’s civil war. Since December 2019, the governorate has come under intensifying attacks by forces loyal to the Syrian regime aiming to seize the remaining rebel-held areas.

Omar and her family were first forced to leave everything behind and flee Aleppo in 2016 after forces loyal to President Bashar al-Assad took control of the city, ousting the opposition groups. Their new home then became makeshift housing in a small town in the western Aleppo countryside.

‘We Only Want Peace’

“We tried to start over again in Atarib. First, we lived in a tent for a while, and only last year was I able to build a small house of two rooms. Now we have to leave everything again and flee,” said the grief-stricken Syrian woman, who ended up in Afrin in northern Aleppo.

“We only want peace now. We want this war to end. We want to save the remnants of our lives and our children. We lost half of our sons in this monstrous war,” she said.

Omar’s family of 20 members is expecting to be placed in a refugee camp in Afrin among thousands of other newly displaced Syrians. Until then, they will be sharing a house of only three rooms with her sister’s family.

Even in Afrin, the family is not confident of safety. The volatile town was under Kurdish control until March 2018 when Turkey and its allied Syrian militants launched Operation Olive Branch. The operation has displaced thousands of the population, and rights organizations are reporting the Turkey-backed militants have been relentlessly looting local homes.

The Syrian Observatory for Human Rights, a Britain-based war monitor, has said more than 1 million civilians have been displaced from Idlib, and the numbers are increasing.

Local sources reported that thousands of Idlib civilians seeking safer havens than cities like Afrin resorted to a narrow strip close to the Turkish border. The civilians had to flee those areas, however, following shelling by Syrian government forces.

Convinced the government troops likely will not cease their military operations until they completely crush and domainate the Idlib governorate, additional displaced civilians continue to escape toward the northern and eastern parts of the country.

Many displaced Syrians have resorted to areas under the control of the U.S.-backed Syrian Democratic Forces (SDF) in northeast Syria, where relative stability has been achieved since the Islamic State was conquered in March 2019. In IS’s former self-proclaimed capital, Raqqa, local community members and authorities are helping the newly arrived people by setting up emergency shelters and hosting them in their homes.

The commander of the SDF, Mazloum Abdi, earlier this month said thousands of people already had arrived in their areas and more were expected in the coming weeks.

“We welcome all the displaced from Idlib. We are all Syrians. There are no walls, nor are there landmines leading to our area — and there are no soldiers or guards that could target the travelers,” Abdi said in a tweet.

Osama Khalaf, a member of the Raqqa Civil Council, told VOA that because of the large numbers of civilians arriving in Raqqa and Manbij, local authorities have opened two refugee camps along the outskirts of the two cities.

“Since the defeat of the Islamic State in Raqqa in 2017, the city has become a destination for many refugees coming from other areas as services and basic needs increasingly become available. But as more people continue to arrive from Idlib, we need international support to provide aid for everyone,” Khalaf said.

Mark Lowcock, the U.N.’s undersecretary-general for humanitarian affairs, warned Monday in a statement that the humanitarian situation in the region had reached “a horrifying new level.”

“The violence in northwest Syria is indiscriminate. Health facilities, schools, residential areas, mosques and markets have been hit. Schools are suspended. Many health facilities have closed. There is a serious risk of disease outbreaks. Basic infrastructure is falling apart,” Lowcock said.

Activists and aid workers in the region told VOA they were overwhelmed as they attempted to provide humanitarian aid for thousands of people who lacked even basic necessities. They said children and women were particularly vulnerable.

“We are trying to secure milk for 4,000 babies, aged between one day and 1½ years,” Ibrahim al-Samadi, an aid worker with the Afrin-based Sanabil al-Khair organization, told VOA.

As towns and villages were becoming overcrowded with displaced people, al-Samadi said more people were resorting to setting up tents in open fields outside cities. He said aid organizations were struggling to provide the displaced with tents, blankets and heating fuel amid harsh winter weather.

Maisaa al-Mahmoud, an activist who works with Syrian refugees near the Turkish border, said aid organizations needed to pay particular attention to children, who are highly susceptible to disease and malnutrition. The female activist, who was displaced from Aleppo and lost one of her sons in the war, said the people were feeling abandoned, with no hope anytime soon for a better life.

“In one of our missions to distribute aid to refugees, I was trying to cheer up a child by asking him, ‘What do you want to become when you grow up?’ The child answered, ‘I just want to stay alive,’ ” she told VOA.