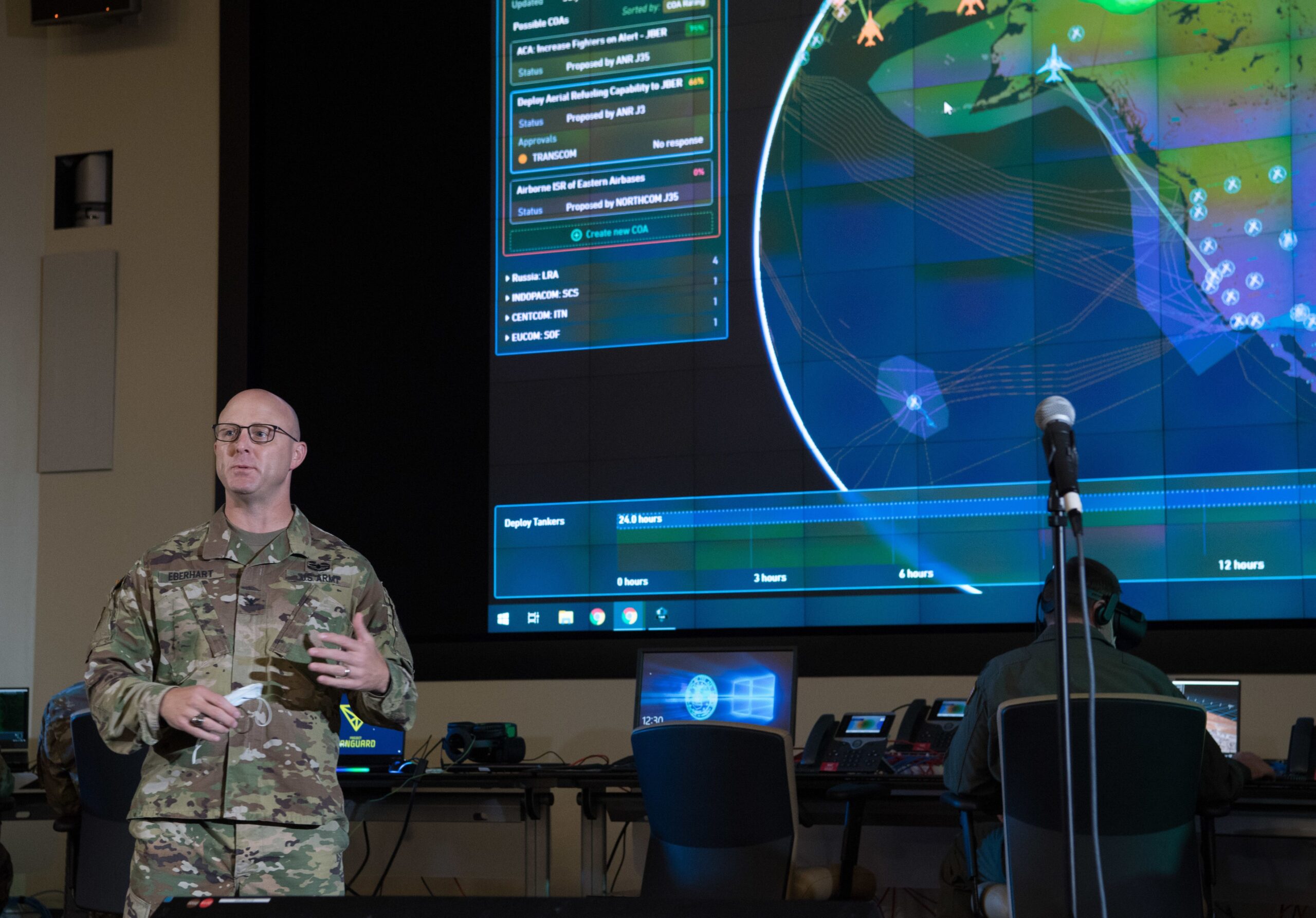 Getting away from ‘anything goes’: Military leaders set data standards for joint war fighting

ABERDEEN PROVING GROUND, Md. — Top military leaders signified a new level of cooperation on joint war fighting in an all-day meeting Jan. 26 to hash out data standards to connect the services’ largely disparate projects to work together to compete against Russia and China.

Meanwhile, the Army shared details with C4ISRNET Tuesday about a successful lab demonstration of a data exchange with the Air Force, mirroring the type of cross-communication needed to achieve the Pentagon’s goal to connect targeting information from any source to the best shooter from any service, an effort known as Joint All-Domain Command and Control. The Army allowed C4ISRNET to tour the facility’s C5ISR Center experimental environments, set to become a central hub in integrating systems across services.

“This is probably the first time that I have seen a level of cooperation and commitment to an outcome,” Marine Corps Lt. Gen. Dennis Crall, the CIO/J-6 of the Joint Chiefs of Staff told C4ISRNET in an interview at Aberdeen. “So in addition, this is simply the moving of these ideas, which I think are pretty novel, and moving them to a plan, where we have mission threads, places to start, and a genuine desire to challenge authorities, resources and processes if they don’t fit the rapid nature, and the type and scope of work that we need to do to get this outcome.”

With the Joint Chiefs leading the project, Crall has been vocal in calling for cooperation on JADC2, stating that old data governance models will not be successful as the services look to connect their networks. In future battles against technologically advanced adversaries, the services must rapidly exchange information to enable commanders to make quick decisions, such as putting fires on target.

Crall called the meeting, as reported by Breaking Defense, to work toward agreement on common data management practices to ease the services’ ability to share information, moving away from JADC2 efforts that have largely been “anything goes,” which he called unsustainable.

One step accomplished at the meeting was agreeing on a definition of a common data fabric, a task that Crall said seems “simple, but it’s complex.” The people in the meeting who worked out that definition included officials from the Joint Chiefs, Pentagon chief data officer office, Army, Navy, Air Force, Space Force, Defense Intelligence Agency, Defense Information Systems Agency, combatant commands, Department of Homeland Security, and NATO.

Here’s the wording they settled on: The data fabric is “a DoD federated data environment for sharing information through interfaces and services, to discover, understand and exchange data with partners across all domains, echelons and security levels.”

In order to make JADC2 a reality, the Air Force’s Advanced Battle Management System, the Army’s Project Convergence and the Navy’s Project Overmatch must be able to transfer data to each other, a task made impossible if the systems can’t read or translate the data into formats that a system understands. While the services go about their own concepts, Crall recognizes that “one size does not fit all” but said that they need to be ready to come together sooner than later.

“Today was really about setting that baseline of common level understanding and vernacular, particularly as it relates to all the way down to these mission threads and across the joint force,” Brig. Gen. Rob Parker, the J-6 deputy director for Joint All-Domain Command and Control on the Joint Staff, told C4ISRNET, adding that the Defense Innovation Board would review the definition before it is finalized.

Stuart Whitehead, the J-6 deputy director for cyber and command, control, communications and computers integration on the Joint Staff, said the stakeholders identified components of the data fabric definition that they will turn into objectives to direct subsequent work on JADC2.

These components, according to the agenda viewed by C4ISRNET, are metadata tagging, common data interfaces, data access control, data security and data infrastructure. The agenda also said the overall lead for the common data fabric will be the Pentagon’s chief data officer, Dave Spirk.

“It’s given us … a foundation, but it’s also given us a springboard for what we’re going to work next,” Whitehead said.

To enable that, the Joint Staff is working on joint war-fighting requirement documents, a strategy to build JADC2 and define common language for the services. The challenge the Pentagon faces is that the services fight in their unique domains, meaning they have their own needs.

“There comes a point in time where if there’s really no benefit, and only risk and expense as a result of those differences, then we’ve got to collapse those sooner rather than later,” Crall said.

Whitehead pointed out that one of the biggest challenges to sharing data is the fact that requirements have changed so much over time.

“We’re now talking about linking programs between multiple services in order to get a collective capability, [and] that is probably a situation that wasn’t anticipated when a particular requirement was created, say 10 or 15 years ago,” Whitehead said.

Parker noted that the stakeholders discussed reciprocity of systems, or accepting mature, rigorously tested solutions developed by other services.

“We need to get out of our own way sometimes to bring those types of things, and faster, to really bring about that interoperability,” Parker said.

The Air Force and Army have actively worked on plugging their capabilities together after formal staff talks last September between the services led to an agreement to share data and develop common sharing standards.

Describing the experimental data use case, Portia Crowe, the chief data officer of the Army’s Network Cross-Functional Team, told C4ISRNET that the Air Force’s DataONE environment is sharing data with the Army’s common data fabric, known as Rainmaker, which can then transfer that data into the Army’s Command Post Computing Environment. The Army used an application programming interface to overcome the fact that the Army and Air Force don’t use the same data message format.

The Army’s work on a common data fabric, she noted, could be a key piece of joint war fighting.

“We have a common data fabric that allows us to do a lot of that that we couldn’t do before,” Crowe said. “So instead of system to system, we can do one system to many. We can do one data library to many. I mean, the possibilities are enormous now.”

As work on JADC2 moves forward, Crall said that he expects “no less” than three follow-up meetings that will become “increasingly more challenging by design,” with the next session proposed for mid-April.