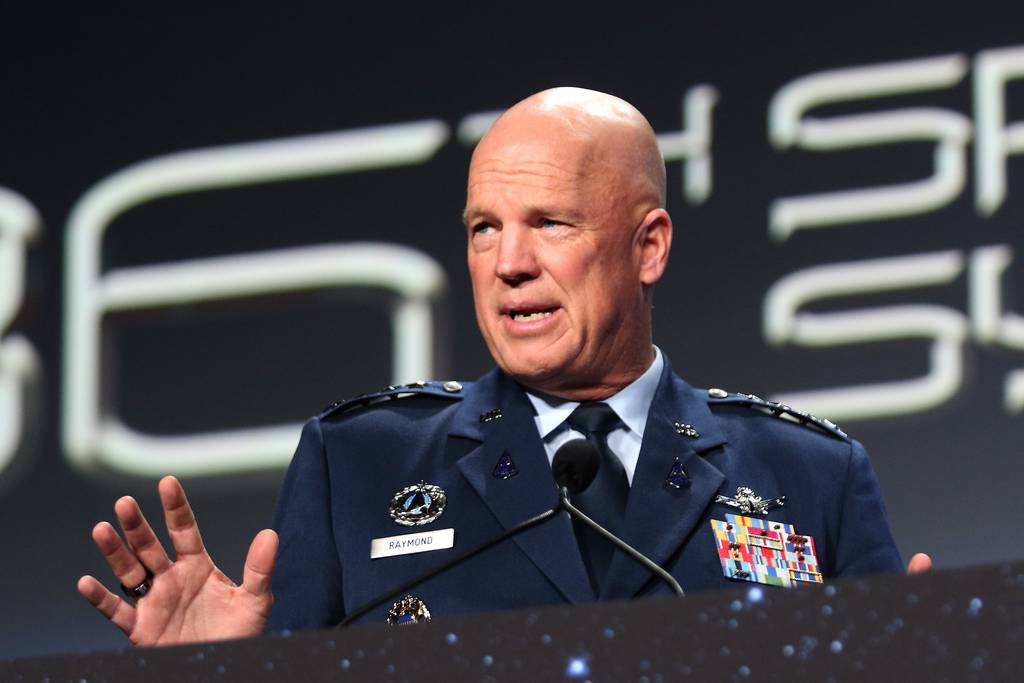 COLORADO SPRINGS, Colo. — In the face of acquisitions criticism from Congress, the head of the U.S. Space Force took to the stage at one of the nation’s biggest space trade shows to tout the service’s accomplishments over its 1 ½ years of existence.

From the main stage at 2021 Space Symposium, Gen. Jay Raymond painted his own picture of the progress made, arguing that the service has completed major changes even if space acquisitions remain spread out across the Department of Defense and intelligence community.

Congress has questioned in recent months whether the Space Force has done enough to reform the acquisitions environment it inherited from the Air Force.

“In the 16 months since Space Force was established, significant progress has been made in standing up this operations unit,” Rep. Betty McCollum, House Appropriations Subcommittee on Defense chair, told Raymond in a May hearing. “However, while progress has been made on the operations side, progress in addressing long-standing acquisitions issues has been disappointing so far. Too often over the past two decades, the space acquisitions programs have been delivered late, over budget, and sometimes billions of dollars over budget.”

She went on to dismiss most acquisitions changes as “minor tweaks around the edges,” and a later budget report from the House Appropriations Committee reiterated concerns that the new service had not done enough to reform acquisitions.

As a mile marker of the Space Force’s progress, Raymond pointed to four problems highlighted by Rep. Mike Rogers in 2017, when the Space Force was still two years from becoming reality. At the time, said Raymond, the congressman laid out challenges that a new independent space service should address: a fractured decision-making process, a lack of integration across national security space, insufficient funding and inadequate professional development.

To the first point, Raymond brought up a 2016 report from the Government Accountability Office, which pointed out that space acquisitions management and oversight were divided across more than 60 organizations. The Space Force concept has frequently faced criticism for not unifying all of those organizations under its authority. But Raymond has a different interpretation.

To that end, the Space Force established the Space Warfighting Analysis Center to develop a new force design, which can then be turned into validated requirements. Moreover, the Joint Requirements Oversight Council has directed that the Space Force will be the integrator for joint space requirements. The Space Force Acquisition Council was also created to facilitate communications between various space organizations and ensure that they’re working together.

Those changes — as well as the establishment of Space Systems Command — will help drive a unity of effort and address that fractured decision-making pointed out in 2017, said Raymond.

He pointed to the Space Warfighting Analysis Center’s first efforts as an early sign of success. The center recently put together a force design for the military’s missile warning enterprise, with support from all organizations involved in that mission, such as the Missile Defense Agency, the intelligence community and more.

As for the Rogers’ budget concerns, Raymond pointed out that DoD’s military space portfolio has received a bigger budget every year since 2017.

And finally, Raymond said the Space Force is quickly moving forward with building up professional development for guardians. In addition to a strong recruitment effort, Raymond brought up the establishment of the Space Training and Readiness Command, which is in charge of the Space Force’s doctrine, training, test and education efforts.

More In Competing in Space