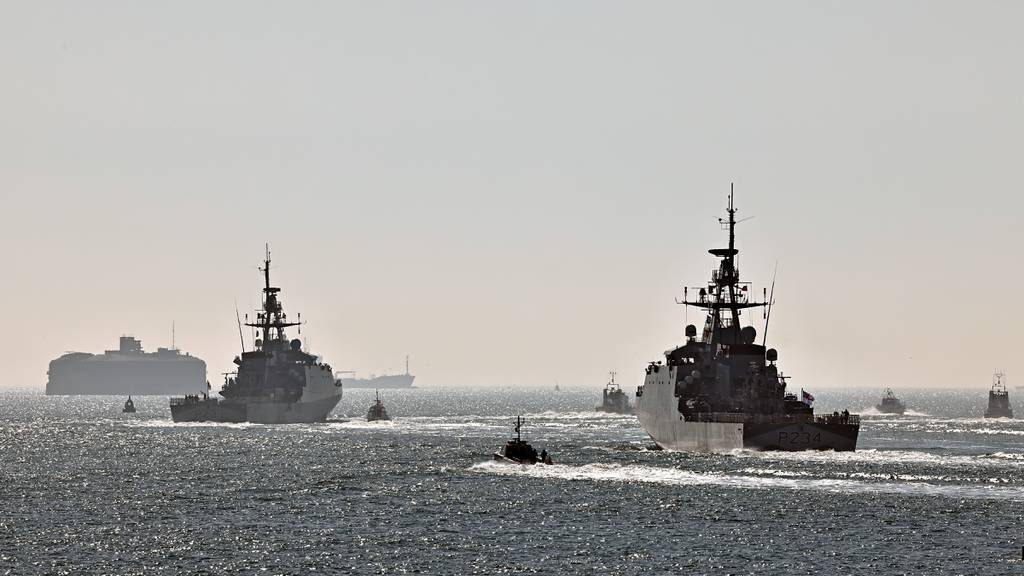 WASHINGTON — The U.K. Royal Navy wants a future fleet with its sensors and weapons disaggregated and its ships flexible enough to change missions as needed, as the service acknowledges that traditional technology superiority may not be possible in the coming decades.

Rear Adm. James Parkin, Director Develop of the Royal Navy, said the “Navy of the Next” will derive its operational advantage from a system-of-systems approach that nets together disaggregated sensors, thinkers and shooters in a way that creates more persistent effects and less vulnerability to attack.

With high-end state actors like China and Russia investing heavily in naval technology, Parkin said the Royal Navy needed to modernize its approach to naval power: traditional technological superiority is not feasible or affordable, so the Royal Navy needs to pivot from deterrence by punishment, or the threat of defeating another military outright, to a deterrence by denial, or the ability to sustain operations just below the level of conflict and impose a cost that the adversary is not willing to accept in the long term.

The prospect of that kind of sustained and potentially widespread effort is pushing the Royal Navy in the direction of a disaggregated web of capabilities that isn’t reliant on any given ship staying in the fight, Parkin said while speaking Sept. 14 at the London-based DSEI 2021 defense show.

To achieve that future fleet, the naval force will have to rethink how it fields and operates new capabilities.

Brigadier John Read, the deputy director for maritime capability, said during the same panel presentation that the maritime force would become more distributed and “more protean by design” — capable of constantly changing form to keep up with the mission at hand.

To do that, the Royal Navy will begin buying and testing Persistent Operational Deployment Systems (PODS), a similar idea to the U.S. Navy’s mission package concept.

“PODS are interchangeable modules that can be fitted to the surface fleet. Similar in design to a shipping container, the PODS create the idea of a ‘plug and play’ warship and will enable Royal Navy ships of all sizes to be more adaptable and versatile when deployed,” reads a Sept. 12 Royal Navy news release.

The PODS will deliver cutting-edge technologies to supplement what the ship already has onboard — and in a further embrace of new technology, the PODS can be delivered via unmanned aircraft or surface vessels, bringing the new war-fighting systems to the ship without the need for a port call.

The Royal Navy will buy five PODS this year for experimentation. Read did not say what capabilities the PODS would bring, though the news release noted they could include anything from an “autonomous boat for surveillance and reconnaissance, quadcopter drones to deliver supplies, humanitarian aid and disaster relief stores or medical equipment. Versatile in their approach, they have the capacity to become an additional medical room for service personnel at sea or a control centre for Royal Marines’ operations.”

Second, Read said the future fleet would operate as a system of systems. This mirrors the U.S. Navy’s idea of netting together all the sensors, combat systems and weapons in the fleet so that the best-positioned shooter can take advantage of everyone else’s sensors. Read said this adds to the lethality of the fleet but also makes it more survivable, with its success not dependent on any single point of failure.

And third, the Navy needs to determine which capabilities are “the old, the now and the new” and divest of old capabilities to free up funds for new technologies, Read added.

As part of this push for “the new,” Read said the Navy would need to improve its data architecture and build a digital ecosystem that could net together all the disaggregated sensors, weapons, decision tools and warfare enablers spread across an operating area — much like the U.S. Navy is doing through its Project Overmatch effort. An early effort will be ensuring data is packaged in the right format so it can be best used and shared across distributed systems in the fleet.

Megan Eckstein is the naval warfare reporter at Defense News. She has covered military news since 2009, with a focus on U.S. Navy and Marine Corps operations, acquisition programs, and budgets. She has reported from four geographic fleets and is happiest when she’s filing stories from a ship. Megan is a University of Maryland alumna.