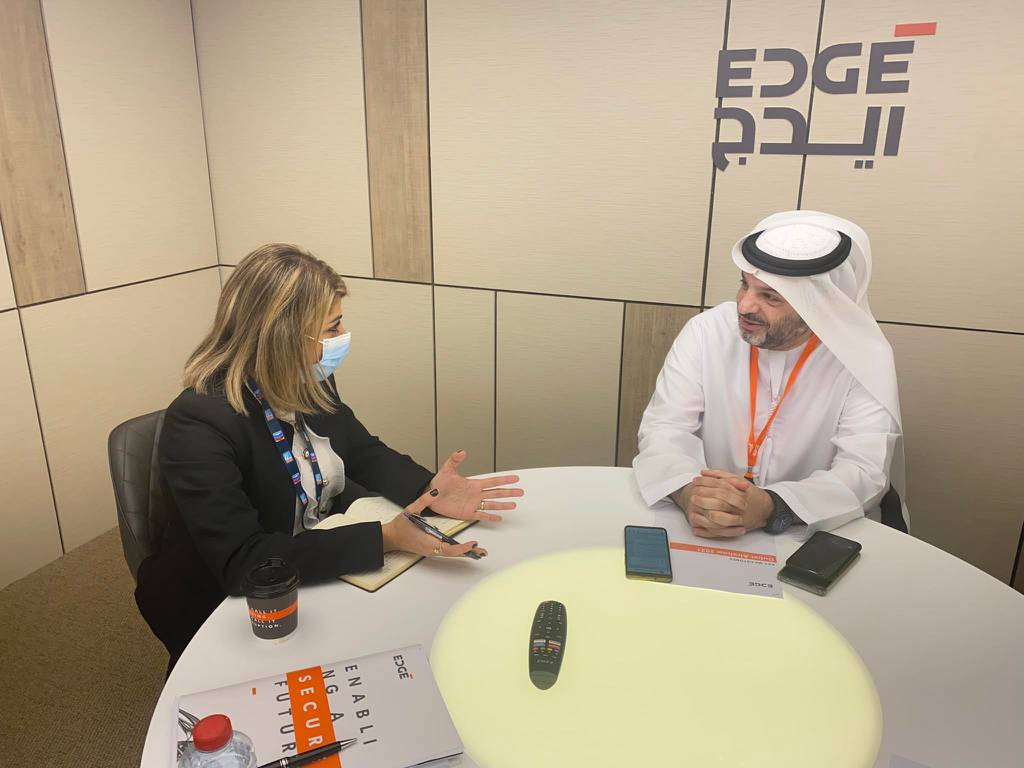 DUBAI, United Arab Emirates — Emirati defense conglomerate Edge Group has had the biggest share of announcements at the 2021 Dubai Airshow between systems unveilings, contracts finalizations and the signing of memorandums of understand understanding. But what arguably stands out the most is the number of autonomous systems at the company’s booth, which made up about half of the offerings on display.

Edge is only 2 years old, but its CEO, Faisal Al Bannai, says the business as achieved several milestones, including in autonomous technology, electronic warfare and smart weapons. But one of the most critical is its share of the United Arab Emirates’ export market on both a regional and global level.

Defense News spoke with the executive at the air show about his company’s efforts in artificial intelligence and autonomy, collaboration on fifth-generation aircraft, use of 3D printing and additional export potential.

This interview was edited for length and clarity.

What has Edge achieved in the areas of AI and autonomy?

The company was launched to be an advanced technology company in the defense industry. Since the launch, we’ve already introduced to the market over 20 products. We have in the road map of development over 40 products, so we’ve been bringing products to market at an extremely fast pace. We said we will focus on the company being a key player in autonomous systems, electronic warfare and smart weapons. Half of the stand here at the air show is for autonomous systems, while 95% of what you see on this stand didn’t exist two years ago. So we have a large presence now in autonomous capability.

On electronic warfare, we have a number of products that we announced in the last two years, and the same thing can be said for smart weapons. At least 60% of these didn’t exist before

Edge is exporting its products within the region as well as to Europe and beyond. Is this a direct consequence of the joint ventures you have with companies in those countries? What are your future export plans?

Regarding our international sales, I can’t disclose our customers, but we have already done over 20 international transactions across the following sectors: autonomy, electronic warfare, smart weapons and ammunition, and armored vehicles. These products have been sold to [customers in] Asia, Africa, the Middle East, the U.S. and Europe — particularly electronic warfare systems, SIGN4L intelligence systems to European countries. Some will be announced in the next few months. These transactions are completed and deliveries took place.

The delivered products are not a result of joint ventures; they are purely 100% UAE products. We are also partnering with foreign companies to jointly collaborate on building certain solutions for the UAE and the international market.

We are no longer a country that only buys defense products; we are developing in-house many products and jointly developing other products.

Edge is developing drones for different missions, from loitering munitions to intelligence, surveillance and reconnaissance UAVs to cargo drones. What is the company’s next step in autonomous technology development and 3D printing?

Artificial intelligence and machine learning is a part of every product today. At [the unmanned conference] UMEX 2022 next February, Edge subsidiary Adasi will unveil swarming drones — and swarms rely heavily on AI — completely designed and produced in-house.

The Rash 2 munition is [made using] 3D-printed [technology]. We are looking at every aspect now of our platforms and missiles to see how to bring 3D printing to them. Next year, there will be a number of products for which we are trying to push the envelope when it comes to 3D printing. So in 2022 and 2023, you will see a number of products 3D printed.

A body frame of a UAV is relatively easy, and this is what we are looking at developing to be 3D printed, but a missile goes through a different heat arrangement. Early success in this development is represented by kits like Rash — body frames for items that are not going through extreme [temperatures]. I think parts and components could be the entry point. We are experimenting with all of this.

Are you involved with the U.S. on the F-35 fighter jet or with Russia on the Checkmate aircraft?

We are collaborating with many countries. When it comes to fighters, first we wait for the UAE Ministry of Defence to decide what it is going to buy. There is no announcement now. Once that is clear, whether it’s for platform A or B, for sure Edge will play a part in the different subsystems, depending on what they are and what the client needs. It’s too early because a decision is not yet made.

Update us on high-energy laser cooperation with MBDA, with CILAS for counter-drone technology, and with Embraer through Edge subsidiary Halcon to integrate Emirati weapons on the Super Tucano plane.

As for the high-energy laser, we are in the testing phase. It is more a joint development program; Edge has engineers working on the high-powered laser to see how to further develop the system. There are many areas of collaboration there, such as the source of the laser and the form of the laser beam. The solution has a number of components on which both teams are collaborating.

Regarding CILAS, that is in the testing phase.

The Halcon agreement on the Super Tucano shows how international players are confident about integrating UAE weapons onto their platforms. Embraer’s work on integrate our weapons made by Halcon onto the Super Tucano means all the aircraft type’s operators will have now access to UAE weapons.

Agnes Helou is a Middle East correspondent for Defense News. Her interests include missile defense, cybersecurity, the interoperability of weapons systems and strategic issues in the Middle East and Gulf region.