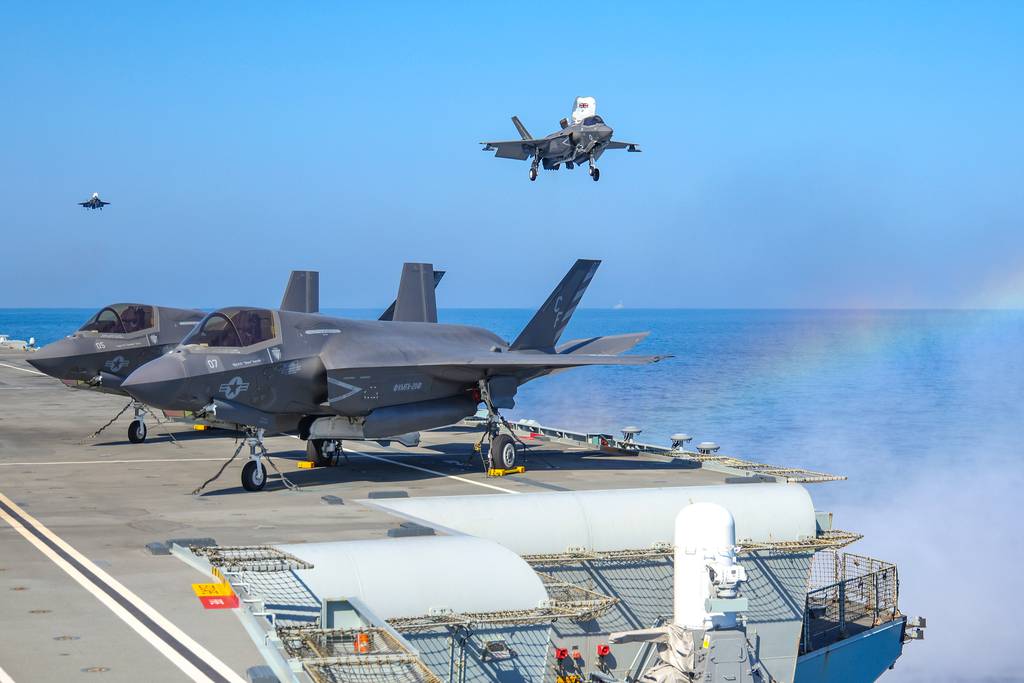 LONDON – Britain’s Air Force chief has outlined a future where synthetic aircraft fuel could be produced on forward air bases and warships, in a speech on the service’s ambitions to achieve net-zero emissions by 2040.

Adopting eco-friendly jet fuel is the key element in the Royal Air Force achieving its green targets, but Air Marshal Sir Mike Wigston also pointed to potentially significant operational gains from development of the technology in a Nov. 24 speech to the Freeman Air and Space Institute here.

“Renewable power generation, like solar or small hydrogen power units, removes the requirement for a massive fuel and logistics supply tail, and the vulnerability and headaches that attracts. And taking it one step further, just imagine if the synthetic fuel plant … could be deployable too, and we were able to make our own jet fuel at a deployed operating base or at sea as part of HMS Queen Elizabeth’s carrier strike group,” Wigston said.

That idea may not be as far away as it sounds.

The RAF’S Rapid Capabilities Office (RCO) is already part funding two synthetic aviation fuel projects and it is hoped that least one of the processes may be portable.

Details of the second synthetic aviation fuel program may be revealed soon. Essentially it will involve a different commercial partner than Zero Petroleum and a different technology.

“The RAF are working with a variety of leading commercial technology partners and will be offering additional information on another fuel project in early December,” an RAF spokesman said.

Zero Petroleum manufactures its synthetic fuel from air and water. It extracts hydrogen from water and carbon from atmospheric carbon dioxide. Using energy generated from renewable sources like wind or solar, the hydrogen and carbon are combined under heat and pressure with metal catalysts to create the synthetic fuel.

The company designed, built and installed a manufacturing plant on a Scottish island in a matter of weeks in order to supply its synthetic fuel for the test flight.

The RAF is already using sustainable aviation fuel (SAF) made from feedstocks such as ethanol or recycled waste oil, but its high cost and lack of availability are raising questions about its viability.

“If there was an assured, affordable supply now we would use it, but the challenge in the short to medium term is insufficient capacity in the production and supply chains,” said Wigston. “To put that into context, global jet fuel consumption is currently around 320 million metric tons per annum. The entire global production of SAF is currently 100,000 metric tonnes, with little immediate prospect of ability to scale it upwards, and its spot price remains steadfastly around ten times that of conventional kerosene.”

The RAF recently flew the prince of Wales to Jordan in its A330 VIP jet using a sustainable aviation fuel blend.

Wigston said that for some platforms “we are pushing with industry for a 100% SAF blend flight soon.”

“The new approaches to synthetic fuel production are environmentally friendly and sustainable; they offer sovereign security of supply; and the chemically purer fuel we are producing indicates that we will have cleaner engines that result in lower maintenance, longer equipment life, and lower noise, heat and visual signatures such as contrails,” Wigston told his audience.

“We aim to have our first zero-emission aircraft operational by the end of this decade. I think it is entirely appropriate that this aircraft will be for our air cadets, university cadets and the very first stages of flying training. If we achieve that, it will be the first military registered and certified zero-carbon aircraft in the world,” said Wigston.

The RAF spokesman said the service was currently “assessing a variety of current technology to gain a better understanding of the new technologies” on offer. “In doing so we are looking to develop future concepts and requirements, as an intelligent customer.”

The air service is looking to replace the 90 Grob built Tudor T1 trainers currently in service.

Rolls-Royce recently demonstrated the progress being made with electric flight, announcing Nov. 19 that it had submitted data to the World Air Sports Federation showing that it had broken three world records with its Spirit of Innovation all-electric aircraft.

In further runs at the MoD’s Boscombe Down experimental aircraft testing site, the aircraft achieved 532 km/h (330 mph) over 15 kilometers – 293 km/h (182 mph) faster than the previous record – and broke the fastest time to climb to 3,000 meters by 60 seconds with a time of 202 seconds, the company said. During its record-breaking runs, the aircraft clocked up a maximum speed of 623 km/h, or 387 mph.