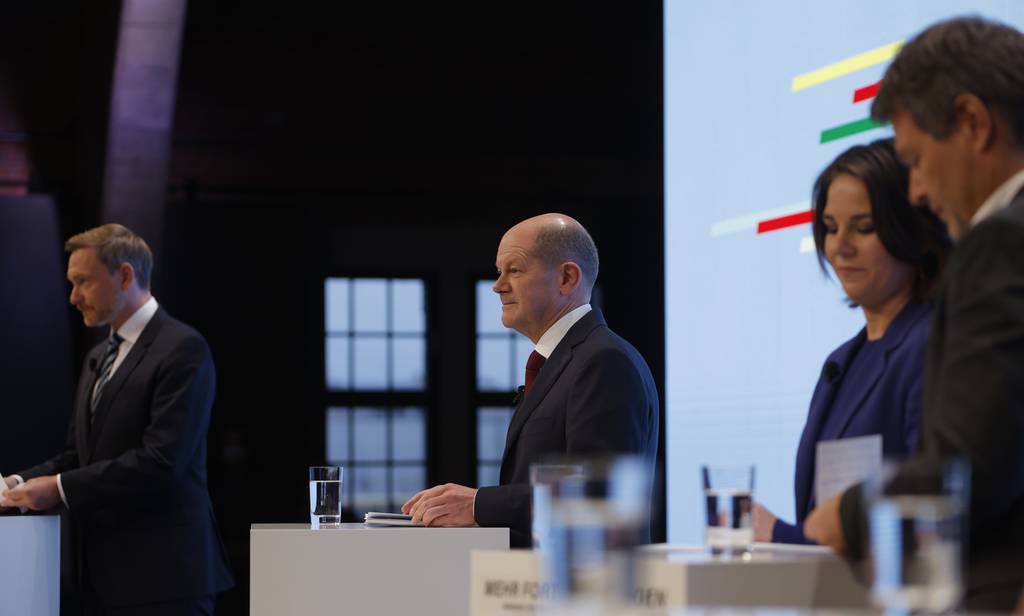 WASHINGTON – Germany’s incoming government has affirmed its commitment to NATO’s nuclear deterrent, including the role accorded to Berlin in the strategy, according to a coalition agreement unveiled Nov. 24 by Social Democrats (SPD), the Greens and the liberal Free Democrats (FDP).

The much-anticipated pact offers a flavor of what the new government, to be led by the SPD’s Olaf Scholz, finance minister in the outgoing government, aims to do in the fields of defense and foreign policy. European Union and NATO watchers will find themselves reassured, as the document hits all the right notes on fostering cooperation through those channels while preparing for a “systemic contest” with authoritarian states.

“The good news is that we are at least staying the course,” said Christian Mölling, a senior analyst at the Berlin-based German Council on Foreign Relations, referring to earlier fears by allies that Germany could axe key tenets of its foreign policy doctrine after 16 years of Chancellor Angela Merkel. That was especially the case following anti-nuclear positions in parts of the Greens and the SPD that had allies fearing a shifting stance in Berlin toward atomic deterrence.

Mölling said the compromise of the coalition agreement goes something like this: It includes a commitment to NATO’s nuclear-sharing arrangement, by which German pilots would deliver nuclear bombs stored on German soil in a hypothetical war, while declaring the objective of Berlin becoming an “observer” to the Treaty on the Prohibition of Nuclear Weapons.

The two poles encapsulate a conundrum the Greens, in particular, have had to square for themselves, with party defense spokesman Tobias Lindner previously advocating that a position combining both aspects is possible.

Whatever comes of Germany’s aspirations toward a global nuclear weapons-prohibition regime remains to be seen, however. Mölling describes the relevant passage as “scaleable,” meaning it relies to various degrees on decisions made by allies and conditions outside of Berlin’s control.

Mention of Berlin’s NATO nuclear-sharing commitment, on the other hand, is a more binding objective, Mölling said, noting the agreement makes the replacement of the country’s aging Tornado aircraft with an equally nuclear-capable type an explicit goal for the new government.

The new agreement, which each of the three parties will vote on in the coming weeks, also ushers in a new political stance for the Bundeswehr, Germany’s military, on armed drones.

Such weapons “can contribute to the protection of our soldiers” on global deployments, the document declares, using a formulation that has taken years to ripen in a society that is as military-skeptic as it is debate-friendly.

The passage is the “best outcome that the armed forces could have hoped for,” said Ulrike Franke, a London-based drone researcher at the European Council on Foreign Relations.

German military leaders have argued for years that armed drones could make the difference in dicey battlefield situations when troops are facing a direct threat. Opponents have argued that a history of faulty military decision-making on drone strikes, most recently by U.S. commanders in Kabul, tells a different story.

According to Franke, some details still need to be worked out in Germany’s future use of the weapons.

“What exactly are the ‘binding rules or conditions’ mentioned in the agreement?” she asked. “The Bundeswehr does not, or should not, have a problem with transparency, but too restrictive rules could create difficulties during missions,” Franke said.

In the past, the idea of individual parliamentary approval for armed drone operations was on the table in the German drone debate, she noted. “The Bundeswehr is likely to want to have as much flexibility as possible.”

Sebastian Sprenger is associate editor for Europe at Defense News, reporting on the state of the defense market in the region, and on U.S.-Europe cooperation and multi-national investments in defense and global security. Previously he served as managing editor for Defense News.