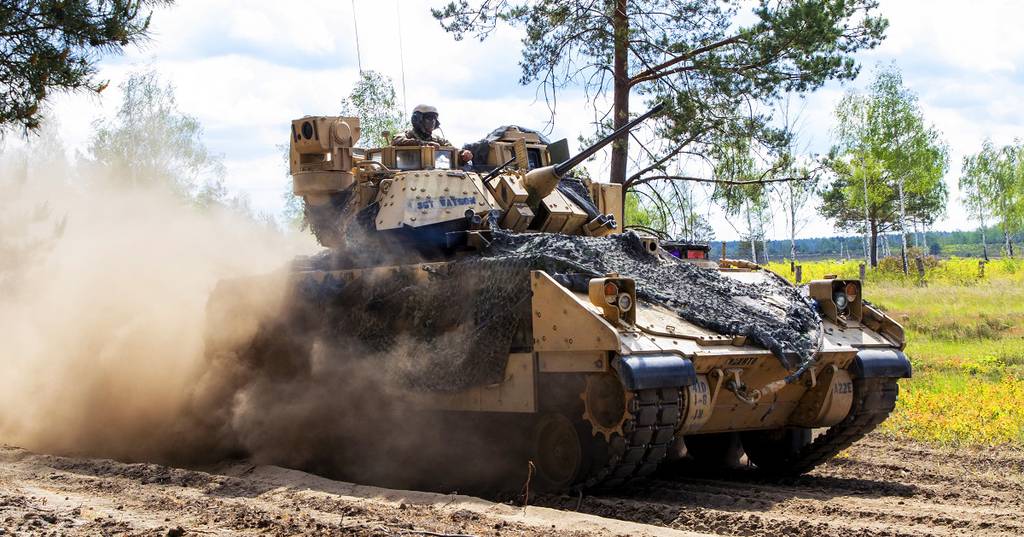 WASHINGTON — The U.S. Army has opened up the competition to design and build prototypes for its Bradley Infantry Fighting Vehicle replacement, releasing a request for proposals to industry July 1 on the government contracting website Sam.gov.

The details of the RFP covering both a detailed design (phase 3) and prototyping (phase 4) are not yet publicly available.

Brig. Gen. Glenn Dean, the Army’s program executive officer for ground combat systems, offered some insight into what will likely be required for the design of the vehicle at the Eurosatory defense trade show last month in Paris.

The requirements approach taken for the Optionally Manned Fighting Vehicle, “is fundamentally different” than those taken in the past, he said.

Starting out with nine characteristics, industry teams have been coming up with design options over the course of the past 12 months and have continuously revised them.

The Army has been through several revisions that “have resulted in a slightly greater level of detail but, frankly, we’re not done,” Dean said.

The requirements in the RFP are not considered final because of the continued design efforts that will go on in the third phase of the program.

At the highest level, the Army wants a tracked vehicle that is considered “medium-weight” – between 40 and 50 tons – that has at least a 30mm cannon with an objective requirement of a 50mm gun, Dean said.

The vehicle would accommodate a two-person crew with six dismounted infantry, balanced with a greater application of autonomy on the platform, he said. The entire platform will be built using a modular open systems architecture.

“That’s mandatory and key because we see that as our growth for the future,” according to Dean.

The Army wants a “silent watch” and “silent mobility” capability, meaning the vehicle can move with the engine off, which translates to a need for a hybrid-electric solution, Dean said. All five teams designed a hybrid-electric vehicle during the last phase.

Reducing the logistics footprint for the vehicle is also important, something a hybrid drive capability could help accomplish, he noted.

The competition is full and open and the plan is to select up to three teams to participate in the detailed design phase followed by the prototyping phase.

The detailed design phase will take place in fiscal 2023 and 2024 and the prototyping phase will begin in 2025. The Army expects to select in the fourth quarter of 2027 one company to build low-rate production vehicles. Full production is expected in 2030.

The OMFV competitive approach has changed drastically from nearly three years ago, when the Army required physical bid samples to enter the competition. The Army received just one physical bid sample from GDLS by its set deadline in October 2019. Defense News broke the news that the only other entry — the Lynx 41 from a Rheinmetall and Raytheon team — was disqualified because it wasn’t delivered to Aberdeen Proving Ground, Maryland, on time.

The writing was already on the wall that the OMFV’s development schedule and requirements had doomed the program when BAE Systems, which manufactures the Bradley, bowed out of the competition months before the deadline.

Instead of moving forward with just one option, the Army canceled its OMFV competition, and took a step back to come up with a plan that would better foster a robust competition over a more reasonable timeline.

The Army dropped the plan to require a physical bid sample at the outset and instead mapped out a five-phased effort that begins with an initial design phase then moves into a detailed design phase, followed by prototyping, testing and production.

Jen Judson is an award-winning journalist covering land warfare for Defense News. She has also worked for Politico and Inside Defense. She holds a Master of Science in journalism from Boston University and a Bachelor of Arts from Kenyon College.